Building the Next Generation of Calibration Units with 3D Printing

Environmental sensors, like the atmospheric remote sensing radiometers that measure gases such as ozone and water vapor, require calibration from blackbody references with known physical characteristics. The next generation of calibrating devices, which will significantly improve performance and lead to more accurate measurements, involve complex geometries and precise dimensions.

Scientists around the globe use desktop stereolithography 3D printing to accelerate research, lower the cost and speed up the development of advanced experimental setups, and fabricate custom scientific devices from millifluidic devices to beam splitters.

Dr. Arne Schröder and the THz-Optics Group at the University of Bern Institute of Applied Physics in Switzerland, in collaboration with AME Ltd., have significantly improved the performance of new highly accurate calibration units for space and ground-based radiometry with 3D printed parts.

Calibration units are built into various instruments studying the Earth’s climate. Microwave radiometers deployed all over the globe monitor atmospheric gases such as water vapor or ozone in the atmosphere. Radiometers often operate continuously to detect seasonal and annual changes in atmospheric composition, providing valuable data to climate scientists.

The mission of GROMOS, one of the radiometers operated by the University of Bern, is to monitor ozone distribution in the stratosphere up to a height of 65 kilometers. This data helps scientists understand complex climate phenomena with global impact. One such phenomenon is the so-called “sudden stratosphere warming” in the polar region during the winter, which caused massive snowstorms in North America and Europe in recent years.

So, where do the calibration units come into play? They help to translate the measured radiation of atmospheric gasses into an absolute radiation temperature.

The procedure is very much like calibrating a mercury thermometer. First, stick the unit into a block of ice (which is always 0 °C) and then into boiling water (which is 100 °C), and mark the height of the mercury column on the cylinder in both instances. Dividing the distance between the two marks into 100 equal intervals results in a working thermometer on the Celsius scale.

The procedure for calibrating a radiometer is very similar. First, the radiometer measures the radiated emission of a chemical species in the atmosphere. After that, the well-defined emission of two different calibration units is measured to provide a reference—just as in the analogy with ice and boiling water.

“With this calibration, it is possible to determine the radiation temperature and thus the concentration of the faraway particles. This calibration procedure is repeated every few seconds, as radiometers are high-fidelity instruments which require constant calibration during operation,” said Philippe Raisin, a researcher of the project.

Scientists must know the properties of the calibration units with a high degree of certainty to provide accurate results. With a mercury thermometer, one has to be sure that the ice is indeed 0 °C and the boiling water is precisely 100 °C. If these values deviate even slightly, the calibration suffers.

The same concern applies to calibration units for radiometers. “To serve as accurate benchmarks, calibration units should exhibit a high microwave emissivity as well as a defined, homogeneous temperature,” said Dr. Arne Schroeder.

In other words, the unit should be as black as possible in the microwave regime. Conventional calibration blackbodies often consist of absorbers made of epoxy resins and metallic support structures which reduce temperature gradients in the absorber.

“Finding the best compromise between the conflicting microwave performance and the temperature distribution constitutes a major challenge in the design process of calibration units. We decided to experiment with water as the absorbing medium. Water has excellent absorbing properties, and since it’s fluid, the temperature can be controlled efficiently,” said Dr. Schröder.

One main challenge remained: how could they shape a water container of a calibration unit to obtain a high performance?

The scientists decided to use a conical shell to separate the water from the air. Computer simulations indicated that this would be a promising way forward, given that the separating material was transparent in the microwave regime. To test their idea, the scientists printed the first prototype shells using Clear Resin on a Formlabs stereolithography (SLA) 3D printer.

“We put these shells in a water-filled jar to have a very simple water-based absorber. We conducted initial electromagnetic measurements which showed that these prototypes displayed excellent electromagnetic performance,” said Dr. Schröder.

“In the first test, the new device was ten times better than a conventional calibration target. The absorption was so good that the measured signal turned out to be close to the noise floor of the testing instrument,” said Mr. Raisin. “These first investigations demonstrated that we were on the right way. Having proven the electromagnetic performance, it was time to build a real prototype to investigate the thermal performance.”

The second prototype consisted of two 3D printed cones, one inner shell optimized for electromagnetic absorptivity, and one outer shell around the former. The water flows in between these two cones uniformly with the help of a guidance spiral. Hoses attached to the device channel water inflow and outflow, and temperature sensors are inserted into the outer shell to monitor the temperature of the water.

Traditional calibration units tend to have poor temperature gradients due to their low thermal conductivity, whereas water allows for a consistent temperature throughout the cone—as required for a high-performance calibration unit. The scientist examined the prototype using an existing ozone radiometer.

Moreover, the temperature homogeneity in the cone is within several millidegrees Celsius (m°C), a significant improvement over other targets where a difference of several hundred m°C is common.

“Being very precise reference sources, water-based units allow for a reliable and precise performance evaluation of conventional targets that are currently under development,” said Dr. Schröder. “The water calibration units used in our lab help us to better understand and improve the performance of solid calibration units, which can potentially be employed in radio-astronomy and space-borne missions. For example, novel geometries can be evaluated quickly using the water-based units and then later transferred into standard material designs.” 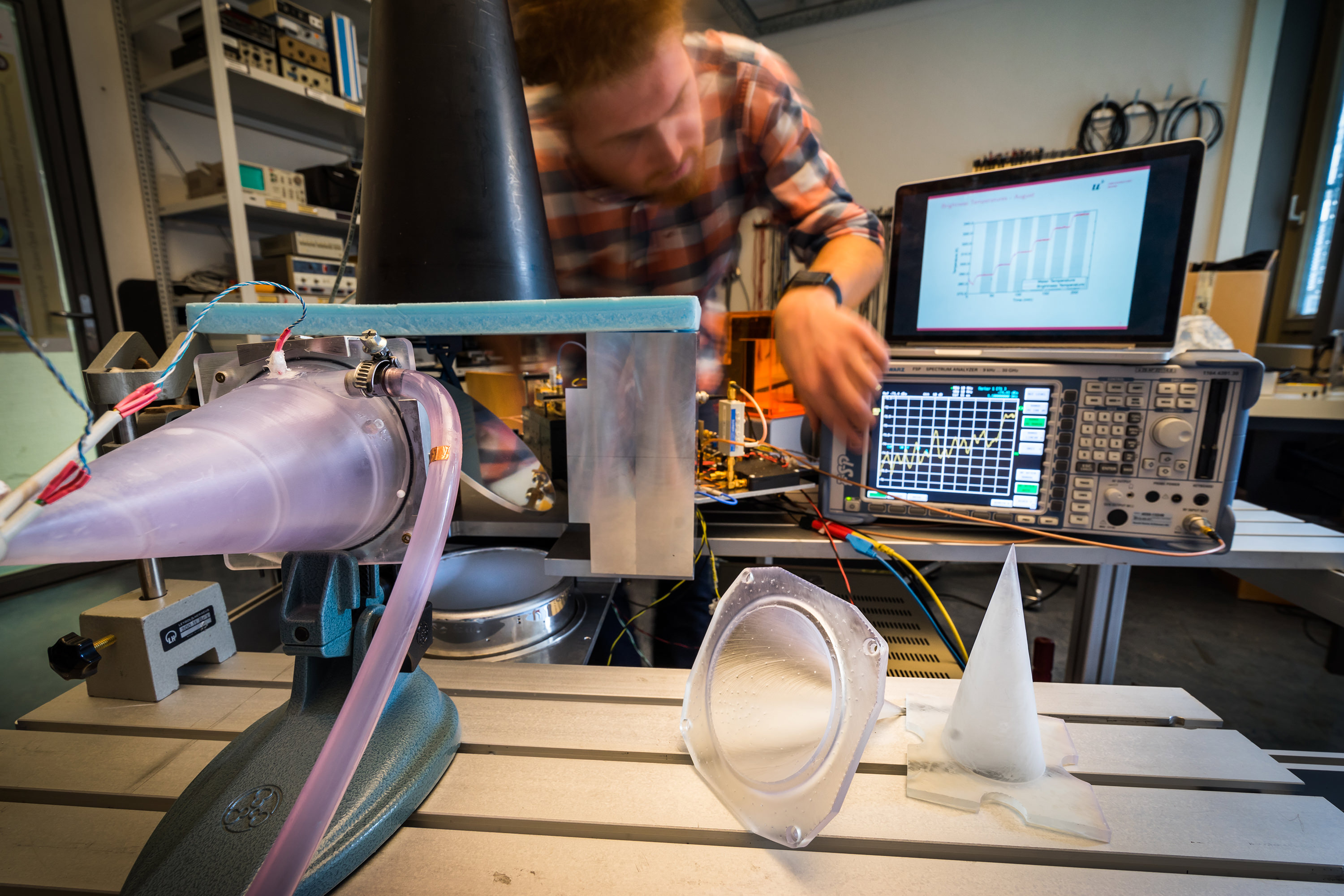 Stereolithography 3D printing helps to lower the costs and speed up the development process, and empowers researchers to efficiently test novel designs which would be impossible to create with traditional manufacturing methods and materials.