Birth asphyxia, the inability for a baby to breathe immediately after delivery, is a global health issue the World Health Organization (WHO) estimates kills one million babies each year. One of Formlabs’ former engineers, Kevin Cedrone, decided to apply his extensive 3D printing knowledge to find a solution to this problem. Kevin is now the mechanical lead of a small team who have been using the Form 1+ SLA 3D printer to prototype an Augmented Infant Resuscitator (AIR) device for use in Uganda.

As a student at MIT in 2012, Kevin participated in a hackathon where he met Dr. Data Santorino from Mbarara University. Dr. Santorino, an experienced national trainer with Helping Babies Breathe, came up with the original concept for the Augmented Infant Resuscitator. Together, the team created a crude yet functional prototype at the hackathon as a proof of concept that demonstrated low-cost sensors could give valuable, instantaneous feedback.

The device uses sensor readings to look for common signifiers of asphyxiation. After the hackathon, the team continued to iterate on the design. Kevin noted that it was crucial to be able to quickly print and adjust the model with 3D printing.

“3D printing was a core part of our design and prototyping. I was able to combine about 6 components into one single print… our current design isn’t realizable with machining or injection modeling without extension modification.”

AIR has partnered with the Helping Babies Breathe initiative, which focuses on minimizing birth asphyxiation in resource-limited areas through education and training. The digital readout from the AIR device provides users with real-time feedback and cues for going through the resuscitation process correctly every time. Over time, they hope this will minimize incorrect applications, as well as builds skills and confidence in those working with newborns. 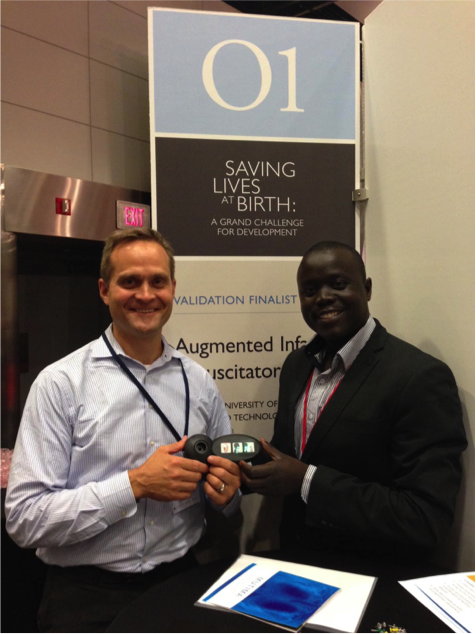 In addition to developing areas, first world hospitals are taking notice. AIR has recently started a partnership with Mass General Hospital and also won an award at the Global Pediatric Innovation Summit. The next step for the company is to run trials with several different hospitals in order to collect data on the long-term effectiveness of the AIR device. At an affordable price point, the device is well on its way to saving the lives of millions of newborn children.